Considered one of the oldest and best preserved in France, the apothecary’s shop of Baugé is an exceptional jewel from the 17th-century pharmacopeia. Built in 1675, this dispensary was still in activity in the 1940s. It was first listed as being of historic interest in 1916 and was registered as Historical Monument in 1947.

The pharmacy of Baugé

The apothecary finds its etymology in the Greek term “apoteke”, meaning “to keep, to store”, and in the Latin root “apothacarus”, meaning “shopkeeper”.  Therefore, the apothecary’s shop is a room in which raw materials and medicine were stored.

The pharmacy has a coffered oak parquet floor, assembled and nailed, with a central marquetry sun motif. The chestnut wood ceiling is painted in red and white faux marble on a blue ground. It comprises 11 coffers dotted with gold stars.

The furniture is composed of dressers with 8 shelves and barley-twist walnut columns. The walls of the pharmacy are clad from floor to ceiling in oak paneling. The apothecary’s shop at the Hôtel-Dieu de Baugé has a unique collection of 16 albarelli (a vase-shaped object), 91 pill dispensers, 95 chevrettes (specially-shaped jugs), 79 pots-canon (cannon-shaped containers) and 3 earthenware bottles. Among these pieces are some Lyonnaise earthenware sets dating from the 16th century.

The apothecaries of the period had specific pots for storing their preparations, depending on the consistency of the remedy. The albarelli or pots-canon were used for storing solid or paste-like preparations, such as balms, ointments and plasters.

Pill dispensers and pots-canon were used for storing pills and powders. The symbol of the apothecary’s profession, the chevrette was used for storing syrups, oils and various liquid preparations. The resemblance borne by its pouring spout to the horns of a goat earned it the name of chevrette. 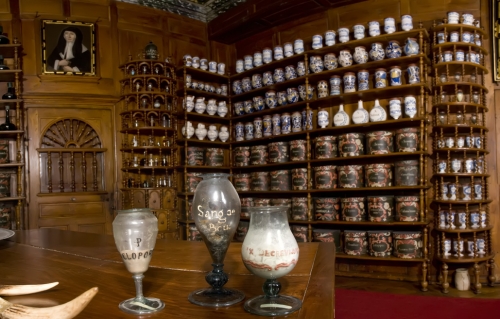 The Baugé apothecary’s shop also has a number of glass receptacles, including 63 bottles of the period in mould-blown glass, containing various plant-based alcoholates, as well as a hundred or so small low-footed glasses , which served as pill dispensers. In order to prepare their remedies, the apothecaries had all the raw materials in boxes at their disposal. At Baugé, there are over 140 chestnut wood boxes used for storing dehydrated vegetable, mineral and animal products.

For nearly 300 years, the Baugé apothecary’s shop has been run by the apothecary sisters of the community of Hospitallers of St. Joseph. Their knowledge, mainly gleaned from books, is passed on orally. Aside from being responsible for the supply of drugs and preparations, the pharmacist sister is also tasked with administering remedies to the sick.